The following text was originally intended as a contributed essay to a major European newspaper. Unfortunately I failed the deadline by 24 hours and it did not materialize. Even if I made it, I suspect that the editors would not like it because of its unspectacular, off the standard context of “human interest” story. Nowhere else to go, the text ended up here. After all, this is my blog, so it is where it should be.

I was preparing my late lunch at home and had just put a bento pack into the microwave when the first strike hit the whole nation. After a few seconds, I realized that the earthquake was really big. All the things in the kitchen rattled and the rack beside the fridge began dancing frantically. So I decided to hold it by both hands, like a Disney character trying to stop a big lorry running over you. I knew it was meaningless and thought the rack would fall down entirely eventually. But you know, there was nothing else to do.

30 seconds passed. Or was it an entire minute? I lost sense of time. I was still holding the rack (it did not fall down after all). The whole house was still shaking. Now in a big and slow swing. From my past experiences, that is a sign that the earthquake is a really big one with an epicenter rather far from my place. Similar to the one in Kobe in 1995, but this one was MUCH bigger. 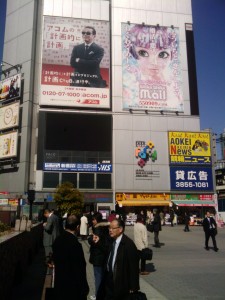 The sway decayed. Confirming everything in the kitchen is alright, I ran to the TV set and turned it on. I knew somewhere in the country had been hit severely, but where? The TV was already updating the status of the incident. The news crew of NHK was reporting that the big strike with Richter-scale 8.4 has just hit the Tohoku region. Hew, 8.4! It is really big. (afterwards, they changed it upward to 9.0)

I made a phone call to my wife, who was working at a nearby pharmacy store. After several retries, we got connected. Over the phone, she said she was alright, but her voice was trembling and she was clearly in a state of shock. She hates earthquake more than anything else. So she was in a panic. I said that it would be alright and told her to stay with her colleague at the pharmacy.

Then I thought about tsunami. We live by Enoshima Island, on the side of inland, not on the island side, in a coastal region 50km south of Tokyo. In fact, it is only 10 minute walk from my house to the beautiful beach of Shonan. My wife and I always stroll along a boardwalk at the beach during sunset time, overlooking Sagami Bay and Mt. Fuji with a breathtakingly beautiful background (almost the same composition was applied by Hiroshige, a renowned painter from Edo period for a famous ukiyoe painting). 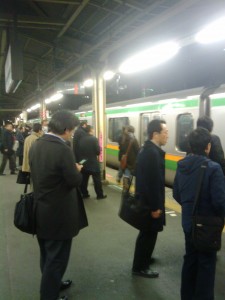 But now forget about aesthetics. You might not be able to make a stroll along the bay anymore. Then the public emergency speaker system started to growl outside. The “large tsunami” warning. Something I have never heard of before. It is not “alert” but “warning.” And “large.” Hey, it is dangerous, I thought. I tried to call my wife by my DoCoMo smartphone, but the line is already too busy. After a dozen retries, I managed to catch her. I told her to talk with her boss to get outside and run. There is a school on a nearby hill, 5 minute on foot, from my house. It could be 10 minute from my wife’s current location, perhaps. It is designated by the city as an evacuation area for locals. I told my wife to meet there and hanged up the phone.

I ran out of my house. Outside Ms. Chino, my neighbor, the elder lady living next door, was standing by the window looking out from the living room of her house. I asked her if she is alright. She looks totally composed, saying gracefully “that was big, wasn’t it? but it is alright. I was in Kobe when the big earthquake hit there. Today’s shake is almost nothing comparing to it. Look. The house is in tact.” 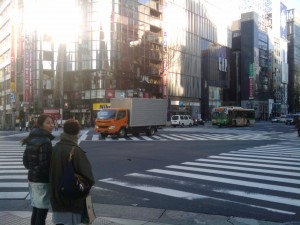 We exchanged smiles. Well, I thought about it. Humm, everything around myself looks quite normal, indeed. Birds are singing. The sky is blue. Ms. Chino is graceful as usual. But what about TSUNAMI? How do you know if it’s coming? Then it occurred to my mind that it is far better to stay at home and watch an Ustream live camera set at Enoshima View Tower, neatly located at the seashore, facing Katase port and Enoshima Island. If there is a danger of tsunami, it should catch any sign of it.

A flock of people is now walking past my house, most likely to the evacuation area on top of the hill. They must be the locals living closer to the seashore. The scene is unnerving, but I decided to go back and stay at my house. 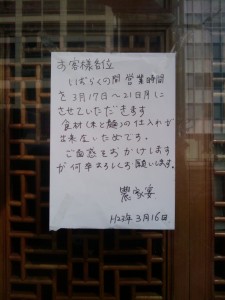 Now the chapter one of my encounter with the Great East Japan Earthquake is almost closed. Back to my working desk at home, I resumed my lunch watching NHK, Ustream and Twitter timeline at the same time. In the next several hours, I spent absent-mindedly just watching live TV feeds showing a real apocalypse unfolding over the North East Japan. While the unbelievable news and scenes kept popping out from TV and a PC monitor, the numerous aftershocks kept swaying my house. It lasted for the rest of the day, and night. You feel like you are on a boat. And at the same time, your mind also kept swaying and drifting, because the overload of the reality (in my case it was only fed by TV and the Internet, but still…) was simply too much, making you difficult to focus and grasp it. Your mind freezes, literally. So in the end, you never knew whether the feeling of swaying was real or just coming out of your nerve.

My wife came back home. She was totally shaken. Probably in panic, she kept acting weirdly, like putting her undressed clothes here and there, picking them up again. We contacted our parents by the fixed telephone. Mobile phones were totally useless because they were busy all the time. Our family members turned out to be all ok. After all, we went to bed, but stayed up all night, watching NHK on TV. We simply could not sleep at all. 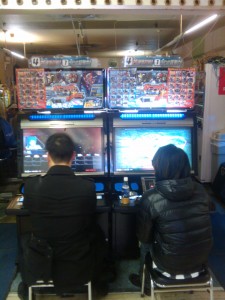 At that time we did not realize what was happening at the nuclear plant in Fukushima. Next morning, the media started to report the troubles around Fukushima Nuclear Plant, but most of us did not take it seriously. The disaster caused by the earthquake and tsumani simply overwhelmed us. In retrospect, the fact that the big tsumani swallowed the nuclear plant is really horrifying, and from the beginning you should have noticed that the situation must have been very alarming. But we did not. I would suspect the government and TEPCO top guys had the same state of mind. It IS an emergency, but the normal procedure for emergency should be sufficient, so please do not worry. We can handle it. Just stop the plant. Thank you for your efforts. Period.

Well, what actually happened was, as you all know, totally contrary. A poor accountability. A collapse of risk management. A chain of human errors and misjudgments. The system which cannot cope with and adjust to the reality. Confusion over information and the order of commands. a lack of leadership. A political and corporate comedy show with aftermath of a huge number of casualties. You cannot laugh at all. It is like you stand in front of the hell gate, with the gatekeeper showing you all your vices and faults in your lifetime. I mean, those characteristics above are exactly what we the Japanese have been self-criticizing ourselves in the last decade or two as “factors to be addressed, otherwise we get doomed.”

And we got doomed.

All the regions along the north east Japan is now a disaster area with Fukushima (and perhaps Ibaragi, too) double-hit by nuclear leakage. Due to the electricity shortage in the eastern part of Japan, including Tokyo, the country is now half paralyzed. The city I live, Fujiswa, which is in Kanagawa Prefecture, south of Tokyo, started scheduled blackouts, around 3 hours (6 hours when necessary) a day. It hit the community very hard. My friends running small shops or cafes told me that they might get forced out of business, if it continues. But it continues. TEPCO does not explain how long it lasts. Two months? Three months? No one knows. Even if TEPCO gives us dates, we do not believe them anymore.

There are long queues at gas stations and super markets. Not because of logistics failure. There are lots of goods. Something else in the social system is apparently not working properly. There are less trains running, so the commuters have to endure severer than usual rush hours (for those who know what rush hours in Tokyo are like in normal times, this means something really sinister).

So, taking scheduled blackouts only, it does not seem working efficiently. People are complaining about the unfair treatment among cities and communities (for example, the central part of Tokyo is not included in the blackout city list).

The earthquake and subsequent tsunami brought a huge disaster, indeed. But now we are experiencing secondary disasters due to malfunctions of our system. maybe not as dire as Haiti, but Japan was, after all, not immune to it anyway. A sense of security has been lost forever.

We have to live with all of it. We need to be strong. Maybe we cannot count on the government, but only ourselves. Now the sense of solidarity is arising among us. Something at the bottom of our heart has been clicked after 311. Or perhaps, awaken, after a long sleep.

I was in Kamakura yesterday. A beautiful old town. The life there is already back in normal. There are less tourists, but it is only a week after the apocalypse. I talked with Jun-san who runs a small T-shirts shop in a shopping arcade called Marushichi Shotengai, which was built as a black market after the World War 2. He said, the business would not be as high as before at least for the time being. but all the shop owners there are in fact already survivors in their own lives, so this is just another round of the games. Let’s re-start. Radiation? Do not worry. We already have pollens flying in the air, causing us hey fevers. So it is just a matter of additional bother.

So we are re-starting. Every morning checking radiation levels.

Administrator of this site
Social
Twitter
RT @kevin2kelly: It only took 58 years to go from the first chatbot (ELIZA, 1964) to one that really works (ChatGPT, 2022). Don't confuse a…1日
RT @ogitayasunaga: 「なぜ冒険家が書店を始めたのですか？」と、この一年半何度も尋ねられたので、その答えとして。読書と冒険の共通性、代替可能性と不可能性による「機能と祈り」 それらをキーワードに、書店と冒険を考えてみました。 https://t.co/canXG…5日
RT @elonmusk: Trees of thought https://t.co/wxeirrmG9E5日
RT @pmarca: One of the most remarkable moments in Internet history playing out right now, in real time: https://t.co/vYQyJP1klp5日
RT @goodside: POV: You're a Senior Data Engineer at Twitter. Elon asks what you've done this week. You've done nothing. Frantically, you o…5日